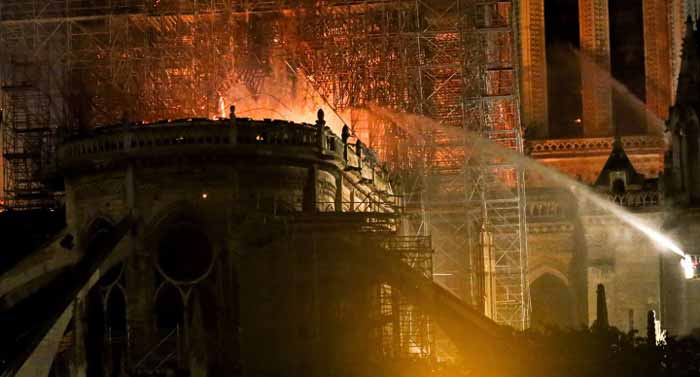 English
April 20, 2019 bdmetronews
bdmetronews Desk॥ Beekeepers are taking heart that a rooftop colony of bees survived the tragic blaze that swept through the centuries-old cathedral.

French Catholics, art historians and beekeepers are celebrating “miracles” amid the damage from a massive fire at Notre Dame Cathedral.

The extent of the damage from Monday’s fire is still being assessed, but a rooftop colony of bees were found to have survived.

French beekeeping company Beeopic, which maintains hives at the historic cathedral, posted a picture of the surviving bees on Instagram, along with a confirmation from the site manager that “nos abeilles” (“our bees”) are still on site.

“Instead of killing them, the CO2 (from smoke) makes them drunk, puts them to sleep,” Notre Dame beekeeper Nicolas Geant told the Associated Press.

“It’s a big day. I am so relieved. I saw satellite photos that showed the three hives didn’t burn,” he added.

Another victory was announced for a different community: art historians. It was found that some of the artwork inside the cathedral suffered less damage than anticipated.

udith Kagan, who works for the French Culture Ministry, said that fire, soot and water didn’t reach inside cathedral walls, so some of the artwork inside wasn’t majorly damaged, according to the AP.

Those works have been transported to a secure location away from the cathedral, Kagan told the AP.